4. If we didn’t evolve, why do humans share so much DNA with chimpanzees?

If there’s one fact about evolution that bothered me as a creationist, it’s that humans shared 95 to 98.5% of their DNA with chimps.

But even before these percentages were known, Creationists had the luxury explaining the results either way: If chimp DNA had nothing in common with humans, the creationists say it’s proof of design; if chimps and humans share significant DNA, they say God reused the DNA.

Evolutionists, on the other ha 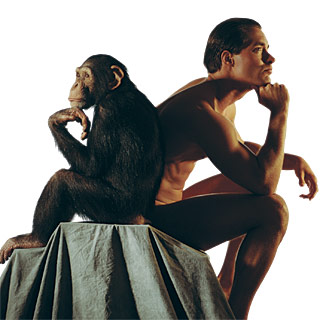 nd, had much more to lose.  If apes and humans had no DNA in common, then DNA could not be the driving force for evolution.

But alas, chimps and humans did share as much as 95% of the same DNA!  So what does this mean? For starters, it was exactly what evolutionists would have predicted: animals evolved from one another and share similar, but not identical, DNA.  (Even other humans only share 99.9% of the same DNA.)  And for the Creationists, it means having to admit that God must have “reused” code rather than creating brand new designs for each species.

Creationists will sometimes try to divert attention away from the similarities by placing the emphasis on the differences, claiming that the roughly 45 million changes in our DNA make us unique. While these changes do make us somewhat unique, it’s a bit like a student plagiarizing a 200 word essay and claiming the 3 words he changed made it unique. The number of differences only seems significant when we ignore all the similarities.

“Just as paintings from the same painter look similar, so do the proteins (and thus, genes) from a variety of organisms designed by a common Designer.”
~ Dr. Georgia Purdom, for Answers in Genesis

Still… which explanation is closer to the truth?  Did we evolve naturally or did God reuse DNA?  Well… if God reused code, we shouldn’t find Him doing bizarre things like using code in humans for things like tales and whiskers, or giving chickens code for teeth. However, if we evolved, that’s exactly the kind of thing you’d expect.  But more on these later.   🙂

56 Responses to 4. If we didn’t evolve, why do humans share so much DNA with chimpanzees?