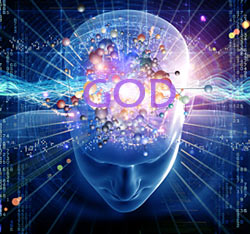 I often hear believers say that they “just know” that God exists. This seemingly innate awareness of God’s existence can be used as grounds to override and dismiss any and all evidence to the contrary.

My own wife uses this as her basis for her faith. For her, she “just knows” that God exists, and that’s enough.

And admittedly, the concept of “God” is so ingrained in our society that it can be a difficult idea to shake, especially for those (like myself) who are experiencing serious doubt for the first time.

But is it true that God is communicating a message of his existence to us, and can we prove it? And if he’s not, can we disprove it?

“Deep down, everyone knows that God exists!”

Believers sometimes claim that, deep down, everyone knows that God exists (see Romans 1:18-32). They will cite as evidence that many diverse cultures have independently arrived at some form of belief in a god, or gods, or spirits.

While true, these disparate cultures came to drastically different conclusions about what “god” is. Quite often there are plural gods. Sometimes they are ancestral spirits. Sometimes they have a specific gender. Sometimes they are animals or natural objects (e.g. the sun). And some cultures have no gods at all (such as some Eastern philosophies — which should give us pause to wonder why God didn’t prompt them into thinking theisticly).

While these gods may differ, the one thing they have in common is they were invented by humans — humans who were all sharing a similar experience.

Surely our ancestors must’ve wondered where the first humans came from. The first humans couldn’t have given birth to themselves, so something else must’ve created them.

They also must’ve also been deeply troubled by death. What happened to people when they died? Where did they go?

And they must’ve wondered why nature behaved the way it did. What made the volcano erupt? What caused the lightning storm? What is the source of the wind and the rain?

All these things led humans to wonder about causes, which led them to invent stories about the intelligence that must have brought these things, and why.

It is reasonable that our ancestors would’ve deduced the need for some sort of cause.

But if it is true that God implanted knowledge of himself in all these humans, it’s curious why he did not universally impart the same basic details. There is a cause, but the causes are different. If God were imparting this knowledge to all men and women, we should be able to arrive at conclusions that cannot be logically deduced.

For example, why didn’t all cultures intuitively know that God is three persons in one? Why don’t they all share the same ten commandments?

(Note that many cultures also invented monster stories, but we don’t use this commonality to try and support the claim that monsters actually exist.)

But can I trust his feelings?

Watch these three short testimonials, and note how these people feel after reading the Bible, the Book of Mormon, and the Quran:

All of them “just know” that their religious text is correct, because of how it makes them feel, and how it has changed their lives for the better.

But if these religions are mutually exclusive (i.e. you’re not allowed to believe in all three), then what some of these people “just know” must be “just wrong.”

At least two of these men (and possibly all three) are being mislead by their feelings. This tells me that I can’t trust my own feelings when it comes to religious matters. As much as we’d like to believe that we can trust our feelings, they can mislead us when it comes to determining truth.

Are you certain you’re certain?

There are also other problems with having certainty about God’s existence.

According to Hebrews 11:6, it is impossible to please God without faith. If we are absolutely convinced, can we still please God? Is our free will destroyed once we obtain this high level of certainty?

Also, is it possible to “just know” something and then un-know it?

There are former Christians, pastors, preachers, priests, etc. who also once “just knew” that God existed, yet these convictions didn’t prevent them from later concluding otherwise.

“If God isn’t giving me this message, then why do I feel so strongly that he exists?”

These feelings may exist, and persist, for a couple of reasons.

Geneticist Dean Hamer postulates that a more religious disposition can be be triggered by a single God gene, and that “spiritually minded” individuals are favored by natural selection (an idea first proposed by Charles Darwin in The Descent of Man).

Inheritable traits that foster empathy, compassion, cooperation, optimism, and an ability to learn, may have helped us to survive. But they may have also made us more susceptible to believing whatever religious dogmas that happened to be a part of our culture. This ability and willingness to embrace communal and cultural thinking (religious or otherwise) may have helped to ensure our survival.

If we are raised from childhood to believe that something called “God” exists, that perception becomes our reality.

If our entire worldview is wrapped around the idea of God, it can be a difficult idea to escape. Years of indoctrination, repetition, Sunday school classes, sermons, Christian schools, emotional songs, the perception of answered prayers, religious experiences, and even casual conversations about God (like this one), can all serve to reinforce the idea that God exists.

Eventually, we may come to “just know” God exists because our brains have been  hardwired to believe it. And because this idea cannot be easily disproved (which shouldn’t be mistaken for actual evidence), the idea is not readily dispelled.

These physical wrinkles in our brain are not easily overwritten, and won’t be, unless we willfully and actively seek out alternative explanations. However, doing so goes against our instinct to conform to cultural beliefs, and so we may feel uncomfortable about rebelling against our culture, and possibly against God himself.

We form our beliefs for a variety of subjective, personal, emotional, and psychological reasons in the context of environments created by family, friends, colleagues, culture, and society at large; after forming our beliefs we then defend, justify, and rationalize them with a host of intellectual reasons, cogent arguments, and rational explanations. Beliefs come first, explanations for beliefs follow.
— Michael Shermer, The Believing Brain, 2012

For example, we all “just know” that words like “shit” and “fuck” and “cunt” are “bad” words. This seems intuitive and obvious. But what makes these words any worse than “poop” or “sex” or “vagina”? Nothing. The “bad” words are only bad because someone decided they were bad, and eventually our culture came to came to accept it. Every generation informed the next that these were “bad” words, and it became true.

But the opposite could’ve just as easily been true. Words like “shit” and “fuck” could’ve become the socially acceptable terms, while words like “poop” or “sex” may have become curse words.

Instinctively, we “just know” that these are bad words. But this has more to do with how our brains were programmed, rather than what is actually true.

Nature readies the brain for survival. It’s quick to learn and conform to social norms. Our cultures define what these truths are, and our brains soak them in. We come to intuitively “know” that God exists because that is what we have been programmed to believe.

But while people may feel they “know” that their beliefs are true, it is clear that feelings and intuitions alone are not reliable tools when it comes to discovering. If they were, we wouldn’t need things like science, detectives, or juries — we would all “just know” the truth in every case.

But clearly, feelings differ on many important topics, and so they are not always useful in determining truth.

The inherent danger in assuming that one “just knows” anything is that it stops one from thinking. It discourages further education, and inhibits well-informed decisions.

“A casual stroll through the lunatic asylum shows that faith does not prove anything.”
— Friedrich Nietzsche

Like Loading...
This entry was posted in God's Behavior and tagged Atheism, Christianity, God, Religion. Bookmark the permalink.