The book of Psalms is a collection of songs, most of which are attributed to King David. Many of the Psalms sing God’s praises, many plead for protection and blessings, and a handful are cited by Christians as inspired messianic revelations. I want to take a close look at these messianic verses (here and under future questions) starting with the bomb that is dropped in Psalm 110:1:

A Psalm of David.

The Lord says to my lord: “Sit at my right hand until I make your enemies a footstool for you.”
~Psalm 110:1

Few words in the Bible have stirred up more controversy than, “The Lord says to my lord.” Who was God speaking to at his right hand? And why was David calling this mysterious person “my lord” (or “my master”)?

And so for Christianity, Psalm 110:1 is an important verse, because it suggests that the messiah is more than just an earthly king in the line of David; he’s someone who existed prior to his own birth, and he comes from a position of authority in heaven. (Fun fact: Psalm 110 is also the most frequently cited Old Testament chapter in the New Testament.)

Jesus also assumes that Psalm 110 was referring to the messiah:

Then Jesus said to them, “Why is it said that the Messiah is the son of David? David himself declares in the Book of Psalms: ‘The Lord said to my Lord: “Sit at my right hand until I make your enemies a footstool for your feet.”’ David calls him ‘Lord.’ How then can he be his son?”
~Luke 20:41-44

And Jesus makes it clear that it is he who sits at God’s right hand:

And Jesus said, “I am; and you shall see the Son of Man sitting at the right hand of Power, and coming with the clouds of heaven.”
~ Mark 14:62

Notice that Jesus also describes himself as “I am,” an unmistakable reference to the Godhead:

Though David was a firm believer in the Unity of the Godhead, he yet spiritually discerns the two persons, distinguishes between them, and perceives that in the second he has a peculiar interest, for he calls him “my Lord.”
~ Charles Haddon Spurgeon, The Treasury of David

If David was indeed referring to a second person in the Godhead, this verse would represent a colossal shift in Jewish thinking. But was this really what David was implying?

Who were the two lords?

There’s no question that the first Lord is God, as it’s the Hebrew world “Yĕhovah.” The second lord is much more ambiguous, and is the Hebrew word “‘adown,” which is usually translated as “lord,” “master,” and occasionally “Lord.”

In the early days of Christianity, Jews were of the mind that this second lord was David. We know this because Peter had to combat such thinking (Acts 2:29-34). According to Peter, since Jesus rose from the dead to sit at God’s right hand, and David was still dead, Psalm 110 must be referring to Jesus. This argument works so long as you accept Peter’s literal interpretation of Psalms 110, and his claim that Jesus rose from the dead, and his claim that Jesus now sits at God’s right hand. In other words, it works as long as you’re already a believer.

While Christians still insist this second lord was Jesus, Jews and critics have suggested a few other possibilities: 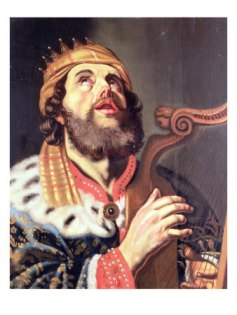 If David meant what Christians think he meant, I mean, if he really did have a spiritual revelation about a second person next to God who was worthy of being called lord and master, I find it wholly inconceivable that David would not bother to elaborate on this massively important spiritual revelation. Perhaps by writing another Psalm about him, perhaps something like this:

Psalm 110.5 (The Missing Psalm)
A Limerick of David

There once was a God named Yahweh,
who had a son in an odd way;
he was fully Him, yet he was also his kin,
and the son of God was known to say:

“I do as my father pleases,
I even sneeze when my father sneezes,
we walk the same walks, and we think the same thoughts,
but I am not him, I am Jesus!”

“I love you,” said God one to God two,
“Because of you I can get things done faster;
so you go and die, while I watch from the sky,
and they can call me ‘God’ and you ‘Master.'”

So to sum up this song, we Jews had it all wrong,
there are TWO persons in heaven, not one;
the Lord on the throne is the Lord that we’ve always,
and the lord to his right is His son!

Even a crappy Psalm like this one would’ve helped to clarify this new revelation of the Godhead. But David doesn’t elaborate, which suggests to me he didn’t feel there was any need to, because he didn’t feel he was revealing something revolutionary.

Whose enemies? David’s or the Messiah’s?

Rather than elaborating on this amazing new revelation, David spends the remainder of Psalm 110 discussing how God would help this person to his right defeat their enemies.

And if you’ve read the Book of Psalms, you know that one of the most prevalent themes is how God helps David deal with his enemies, so it stands to reason that Psalm 110 is an extension of that same theme. It seems unlikely that Psalms 110 represents a sudden departure from this theme into a nearly identical, but spiritual, version of the same theme, about a heretofore unknown second lord in one Godhead who also, coincidentally, needs help defeating his enemies.

Whose feet? David’s or the Messiah’s?

God promises to make the enemies of this person “a footstool,” and we find verses elsewhere that suggest it was David whom God delivered from his enemies, placing them under his feet (not a messiah):

You make your saving help my shield,
and your right hand sustains me;
your help has made me great…
I pursued my enemies and overtook them;
I did not turn back till they were destroyed.
I crushed them so that they could not rise;
they fell beneath my feet.
~ Psalms 18:35-38

“You know that because of the wars waged against my father David from all sides, he could not build a temple for the Name of the Lord his God until the Lord put his enemies under his feet.”
~ 1 Kings 5:3

Is being at the right hand really such a big deal?

The expression “right hand” is used 35 other times in Psalms, without any of the literal or messianic implications that Christianity places upon this single verse. For example:

I keep my eyes always on the Lord. With him at my right hand, I will not be shaken.
~Psalm 16:8

Shall we say that God is now subservient to David? Or that David is a part of the Godhead? Certainly not.

For he stands at the right hand of the needy, to save their lives from those who would condemn them.
~Psalm 109:30-31

Now God is at the right hand of the needy! Is this a spiritual insight that teaches us that God is subservient to the needy? Are the needy a part of the Godhead? Certainly not.

Just because a person happens to sit at God’s right hand doesn’t make the expression any more meaningful. The person in Pslam 110:1 is being asked to sit to exaggerate how little effort they will need to expel in order to defeat their enemies. God is not saying, “Sit here, and together we can rule the galaxy as father and son!” He’s saying, “Kick back, relax, put your feet up, and have one of these fruity cocktails whilst I deliver your enemies to you.”

While it’s possible that Psalm 110 is a spiritual revelation about the messiah, there are too many issues that undermine that conclusion.

First and foremost, we’re placing a tremendous amount of importance on a verse that’s very ambiguous.

Second, David’s failure to elaborate about this second person suggests he didn’t believe he was revealing anything that warranted further explanation.

Third, war is pervasive theme throughout Psalms, along with David’s defeat of his enemies who are placed under his feet, so there’s little reason to believe that Psalm 110 departs from this theme to introduce a new spiritual metaphor… about a second god… who also needs his enemies defeated.

Finally, all Jesus has to do is say, “Ya, I’m the second lord.” He doesn’t prove it by somehow revealing what happened that day, or by detailing the rest of earth’s history that he was also around to witness (such as the ice ages, dinosaurs and their extinction, etc.). He just has to claim the title.

I wish I could travel back in time and ask King David: “When you said ‘The Lord says to my lord,’ were you implying that the second lord was a second person in a triune Godhead? And that this second person, while separate from God, was also mysteriously one with him, as to still allow for one God? And that one day this second person would be born as your great-great-grandson, who separates himself from God, but still remains one with him?” I imagine David would give me a puzzled look and ask, “What the Sheol are you talking about?”