65. Does the Giraffe’s neck infer intelligent design or evolution?

As we’ve seen, nature’s extremes can yield clues about whether evolution, or intelligent design, best explains the design choices we observe in nature. The long neck of the giraffe is no exception, and is used by both creationists and evolutionists to make their case.

The long neck of the giraffe presents several physiological challenges that must be overcome in order to ensure the giraffe’s survival. Blood pressure must be strong enough to overcome gravity all the way up that six-foot-long neck, and when the giraffe lowers its head (e.g. to take a drink), the blood must be restrained from flowing too quickly down into the head, possibly causing brain damage or fainting.

There are several ways in which these challenges are overcome, and some creationists claim that these features are evidence of intelligent design.

The rete mirabile (Latin for “wonderful net”) is a large blood vessel which branches off into a network of smaller vessels, and then reunites into a single trunk (or connects with other blood vessels). When two of these “nets” are headed in opposite directions, they can intertwine (or connect) to facilitate the exchange of heat, gasses (such as oxygen), and/or assist in circulation. 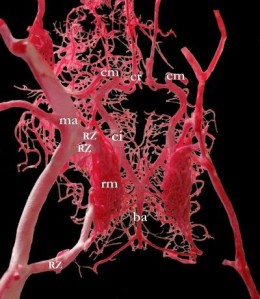 Some creationists claim the rete mirabile is evidence for intelligent design, saying a designer placed it at the base of the giraffe’s brain to prevent sudden changes in blood pressure. And I must confess, as a Creationist, I found this fact to be rather impressive (which is why I chose to research it further).

But upon investigation, I discovered that the giraffe is not the only animal with a rete mirabile at the base of its brain. The okapi (the only other member of the family Giraffidae, which has a much shorter neck) also has one! As do cattle, sheep, goats, buffalo, camels, and even pigs. (And many other animals also use a rete mirabile in various ways in various body parts.)

was not designed specifically to remedy the problems associated with having a long neck. But by failing to mention these other animals, the creationist misleads his/her audience into believing the design is exclusive to the giraffe.

Again, the creationist omits this fact, leading some to assume that God designed these valves specifically to deal with the problems of having a long neck.

Evolutionists also use the neck of the giraffe to argue their own case for evolution, claiming that the recurrent laryngeal nerve is evidence of poor design, which is best explained by evolutionary processes.

Instead of this nerve running directly from the brain to the larynx (which is only a couple inches away), it runs the entire length of the giraffe’s six-foot-long neck, loops around a major artery, and then heads all he way back up the neck to connect to the larynx. That’s a 12′ long nerve for a connection just a couple inches away. (If you have to see it to believe it, you’re welcome to watch a dissection of a giraffe’s laryngeal nerve below.)

Evolutionists claim that this route exists in most mammals (including us) as a vestigial throwback to a time when the nerve took a much more direct route from the brain of a fish ancestor to its gills. As fish gradually turned into land animals, and grew longer and longer necks, this nerve was never redirected (presumably because it functioned just fine as it was).

However, this argument too is a little misleading.

Creationists point out that this nerve is also responsible for carrying sensory, secretory, and motor fibres to segments of the esophagus and the trachea. If that’s the case, then it’s misleading for atheists to omit this fact (leaving their audience to assume the only purpose for this nerve is to serve the larynx).

Creationists also frequently claim that this design is somehow due to developmental constraints, and that the pathway is necessary for the development of an embryo. However, this claim is difficult (if not impossible) to prove.

Creationists present the rete mirabile and venous valves as “God’s gifts to giraffes,” even though both features exist in other animals, regardless of their neck length. Creationists would do better to point to these features in general, in all animals the in which they exist, rather than signaling out the giraffe (though these features in and of themselves are hardly the best evidence for design).

Likewise, atheists present the recurrent laryngeal nerve as “evolution’s gift to atheists,” even though it serves more than one purpose. Atheists would also do better to point out any other connections, so there is no misunderstanding.

I don’t believe there is a clear winner in this case, though if I had to stick my neck out (and my laryngeal nerve), I still find it peculiar that the recurrent laryngeal nerve loops around an artery (where it appears to do nothing), only to make make a return trip back up the neck. A singular descent, branching off to make any necessary connections (as most nerves do) would seem to be a more logical choice.

4 Responses to 65. Does the Giraffe’s neck infer intelligent design or evolution?