21. Why does God allow miscarriages, spontaneous abortions and stillbirths?

I’ll never forget our first ultrasound. My wife had (finally) gotten pregnant and we were expecting to get the baby’s first picture to celebrate with our friends and family. But the woman performing the ultrasound wasn’t celebrating, in fact she was quiet almost the entire visit. She just stared at the monitor and later referred us back to our doctor. Perhaps, we thought, the baby was still too small to be photographed.

Back at the doctor’s office, the doctor’s assistant showed us to a waiting room and whispered, “I’m so sorry.” Sorry? Sorry for what? Our wait time wasn’t that long.

We knew something had gone wrong. Our doctor tried to soften the blow by telling us that the baby was still very small, just a few cells, really. He also said it was very common among first pregnancies. Our baby’s life had ended before it even had a chance to begin.

Neither of us knew exactly how to feel. Sure, we were sad and disappointed, but should we mourn the loss of this life? Was it even a life at all? Our church certainly made a big deal over how life begins at conception, but they weren’t treating this like a “real” death. No one suggested we name the child, or have a funeral, or buy a teeny casket and a tiny burial plot in memory of our lost embryo. Apparently, it was not that big of a deal.

Is not even the womb sacred?

Since then, I’ve learned that as many as half of all fertilized eggs will spontaneously abort. As a Christian, I wondered why God would allow the death of our child, and billions more like it.

After all, Genesis 1:28 does instruct us humans to “Be fruitful and increase in number; fill the earth and subdue it.” As we obey God’s command, it seems self-defeating that he should run interference on fulfilling his own desires. 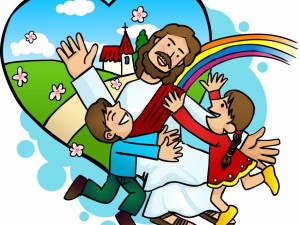 Jeremiah 1:5 and Psalm 139:13 also tell us that it is God who forms children in the womb: “For you created my inmost being; you knit me together in my mother’s womb.” Does God make mistakes? How is it that God can fail at something he is actively building?

Exodus 21:22-25 also teaches us of the value that God places on the life he is creating in the womb: “If people are fighting and hit a pregnant woman … you are to take life for life.”

If the unborn life is this important to God, why doesn’t he protect it? Why would he order us not to harm unborn children, yet allow other forces to interfere with their creation?

In short, God instructs us to multiply, he says he personally forms the child in the womb, he inserts a spirit and expresses the utmost concern for its survival…  and then he allows it to die. Why?

Were do these children go?

One common defense is to say that God “allows” for Satan to kill these children, but God himself is not responsible. Miscarriages, then, are like any other form of suffering: God is not responsible, he just allows it.

So while God is busy knitting a child together in the womb, Satan comes along and says, “Can I take this one?” And God says, “Sure, I will allow it, because man is sinful.”

Even assuming this is true, what would Satan have to gain from killing the unborn?

If you’re Christian, you probably believe that deceased babies get a free ticket to heaven. If that’s true, then killing these children just means Satan loses an opportunity to deceive them during their lifetime. What’s the point of Satan helping people enter heaven? Unless — perish the thought — these children are sent… to hell.

Unless these children go to hell, neither God nor Satan benefit from ending these lives. It is literally a lose/lose situation. So if neither party benefits, why allow it?

Is God sparing us from something worse? 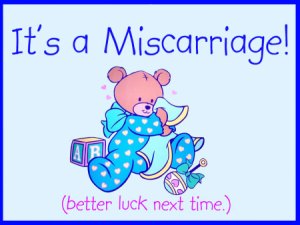 Another defense is to reason that maybe God is being merciful by not allowing a life to continue. But if that’s the case, why start the process at all? If God is all-knowing, why bother to form a baby he know’s he’s just going to toss out? And why allow so many defective babies to make it to term before dying? Why didn’t God show them mercy by ending the pregnancy earlier? Or by preventing it altogether?

Some might be tempted to suspect that miscarriage is God’s way of telling someone they are not yet ready to be a parent. But if that’s true, why not just prevent the conception? And why allow others to conceive who are clearly not ready to be parents? And why do some people alternate between successful pregnancies and miscarriages?

We Christians spend so much time and money trying to prevent abortions, while God doesn’t even bother to prevent spontaneous abortions. God “allows” for more killing than all the abortion clinics combined!

I see no logic behind an intelligent designer who creates life knowing it will fail. Nor can I see the logic behind Satan helping millions of children into heaven.

“There are no easy answers to these questions. Indeed, there is no satisfying conclusion that we will ever come to as to why bad things happen to people, especially innocent children.”

When we believe in God, we sometimes are forced to wrestle with these difficult questions, that result in unsatisfying conclusions. Is there a reasonable explanation? Or are we asking the wrong questions?

If we allow for the possibility that nature alone is responsible for our creation — and not God — we may find answers that are more intellectually satisfying.

If nature alone is responsible, then her lack of compassion is due to a lack of a brain. While it might seem counterintuitive to credit the creation of all life to something without a brain, nature doesn’t actually evolve things through any sort of thought process, but rather by trial and error.

If something can make a copy of itself, it succeeds and goes on to make more copies. If it cannot, it is quickly discarded and does not go on to make copies. In this way, nature’s successes are cumulative and every generation builds upon the previous one.

But nature is no more concerned about making a successful baby than a copy machine is concerned about making a successful copy. That’s not to say that these deaths are unimportant or without purpose, in fact, it’s quite the contrary. It’s nature’s fallen that have made us into what we are today, and we owe our very existence to them. “Failure” is a necessary part of the process, and without it, life would be impossible.

Eventually, my wife and I went on to have two wonderful children, whom we would’ve cherished with or without the miscarriage experience.

But we were left to wonder: “Was this miscarriage a message? A punishment? A curse? Are there invisible forces of good and evil locked in an epic battle over our embryos? Or did nature simply muck this one up?”

Miscarriages and stillbirths are stressful events, and can be even more stressful when we are forced to try and square them with our faith. When we assume God exists, it logically follows that these events are not random, but premeditated decisions. At some point, God has to say “Yes” to stillbirths and miscarries, and this makes little sense.

But if these events are random, then there is no premeditated decision, no responsible party, and no need to make the irrational seem rational. It means that you didn’t lose your child because of God was mad at you, or because God felt you weren’t ready to become a parent, or because God “allowed” Satan take your baby.

Unfortunately, for now, we are still at the mercy of nature to make our copies. Perhaps one day we will be able to intervene, and guarantee the successful development and delivery of all children. But until then, all prospective parents need to be aware that nature is imperfect, and that failure is most definitely an option.

52 Responses to 21. Why does God allow miscarriages, spontaneous abortions and stillbirths?