28. If someone never hears the gospel, can they still go to heaven? 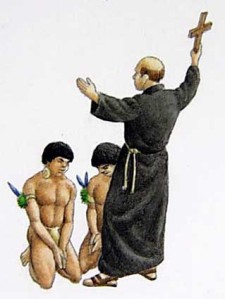 A missionary travels to a remote village and tells everyone about Jesus. He tells them, “If you do not accept Jesus, you will burn in hell for all eternity.” Before the missionary leaves, the tribal elder asks, “If we had never heard about this Jesus, would God have sent us all to hell?” The missionary replies, “No, I don’t suppose God would condemn you due to your ignorance,” to which the elder replied “Then why did you tell us about him!?”

The joke pokes fun of a real conundrum: it would obviously be unfair for God to condemn these people for not accepting Jesus when they’d never heard of him, but at the same time, now that they’ve heard of him, their eternal souls are put at risk.

When turning to the Bible for answer to this difficult question, we find the answers seem to contradict one another.

The ignorant are NOT punished

There are several Bible verses that suggest the ignorant are not held accountable for their sins.

If I had not come and spoken to them [the world], they would not be guilty of sin; but now they have no excuse for their sin.
— John 15:22

The Law brings about wrath, but where there is no Law, there also is no violation.
— Romans 4:15

In the past God overlooked such ignorance, but now he commands all people everywhere to repent.
— Acts 17:30

But if the ignorant are excused from sin and wrath, then the first rule of Christianity should be, “Don’t talk about Christianity.” If knowledge brings with it the possibility of condemnation, then it is better to never receive that knowledge.

The ignorant are ARE punished

On the flip side, there are other verses that suggest the ignorant will be punished.

He will punish those who do not know God  … They will be punished with everlasting destruction and shut out from the presence of the Lord and from the glory of his might.
— 2 Thessalonians 1:8-9

But if the ignorant will still “perish apart from the law” for their sins, then God comes across as unfair for punishing the ignorant.

The ignorant are are punished on a sliding scale

There are also verses that hint that judgement varies according to how much knowledge you have.

But he that knew not, and did commit things worthy of stripes, shall be beaten with few stripes.
— Luke 12:48

My brothers and sisters, not many of you should be teachers … we who teach will be judged more strictly than others.
— James 3:1

But if more knowledge means more potential punishment, then we’re back to the first rule of Christianity: “Don’t talk about Christianity!”

While these verses appear to contradict one another, fundamentalists insist there are no contradictions, and that we should look to the larger Biblical themes to facilitate our understanding of these verses.

So how do most Christians answer this question?

Not all Christians agree, but in researching this question, I found the majority of believers siding with the idea that the ignorant are guilty of sin and are still in need of salvation.

I believe this conclusion is driven by evangelism and salvation being such strong overriding themes in the New Testament. If the ignorant are innocent, then evangelism is rather pointless, since these people will go to heaven either way. It’s only when the ignorant are guilty that evangelism becomes important.

But how can a man be guilty if he’s never heard the law?

How to make an ignorant man guilty

I think most Christians would agree that a man becomes guilty once he breaks one of God’s “natural laws.”

Natural laws are a subset of God’s Law (found in the Bible), and God has made these natural laws instinctive, by writing them on our hearts.

These natural laws speak to us as our conscience — that little Jiminy Cricket voice inside our head that says “Don’t lie, don’t cheat, don’t steal, don’t kill, and stop touching yourself.”

For when Gentiles who do not have the Law do instinctively the things of the Law, these, not having the Law, are a law to themselves, in that they show the work of the Law written in their hearts, their conscience bearing witness and their thoughts alternately accusing or else defending them…
— Romans 2:14-15

And naturally, we all are guilty of breaking these natural laws.

So the “ignorant” are not truly “ignorant,” because they have God’s law written on their heart, and they are not innocent, because all have fallen short and sinned. And unfortunately, just one sin is enough to get you cast into hell forever, so salvation is of the utmost importance.

If this consensus view is true, there are some major problems with it.

Problem #1: Got makes getting into heaven more difficult for some than others

If a man is born to Christian parents in a Christian culture, and he violates one of God’s Laws, his Christian culture tells him of the consequences and provides him with a way out. He can sin a thousand times, and still be forgiven.

But if a man is born away from any Christian influence, then he is ignorant of how to obtain forgiveness for his sin. When he breaks one of God’s “natural laws,” he remains condemned, because the escape route is not as obvious.

No one comes to the Father except through me.
— John 14:6

If it’s true that forgiveness only comes though Jesus, then this man is condemned to hell, for committing one sin. Through no fault of his own, he was born into a culture that couldn’t teach him how to obtain forgiveness.

At this point, we might be tempted to argue that God would make some sort of concession in this case, but the more we insist that the ignorant can receive forgiveness, the less urgent evangelism becomes.

Problem #2: God did not write all his laws on our hearts

Why write a “natural law” on our hearts, and give us the “gifts” of conscience and guilt, and then not tell us exactly how to repent? And to whom? This seems like an important detail to leave out.

Why must the answer be delivered by an external source? Missionaries wouldn’t even be necessary if God would’ve written his entire message on our hearts, and we wouldn’t have the confusion over which missionaries were the ones to believe.

Problem #3: How can we obey God’s natural laws when we’re not sure what they are?

If God has written a subset of his laws on our hearts, what exactly are they?

According to Romans 2:14-15, God’s laws are an instinctive part of our conscience that accuse us when we do wrong. So if we desired to make a list of God’s Natural Laws, we might start by looking for “instinctive” morals that most humans seem to share. Also, violating these morals should result in a guilty conscience.

Let’s imagine we performed such a study and found several behaviors that were universally viewed as immoral, things like:

Firstly, did these rules need to originate with a God, or are they self-evident? All of these behaviors have observable negative consequences, or we can easily reason that we wouldn’t want others to do these things to us. If any reasonable person can understand why such behaviors would be undesirable, do we really need God to write them on our hearts?

Third, feelings of guilt are often unreliable measures of right and wrong.

For example, an anorexic girl may feel guilty about eating a sandwich, but is she right? Is God using guilt as a natural way of condemning her for inappropriate behavior? Or does she feel guilty only because she did something she believed was wrong? And her mind is now wrestling with the logical contradiction? Guilt seems to stem from what we believe is wrong, and not what God says is wrong, but if God’s Natural Law really exists, should’t we only feel guilty for doing things that are actually violations of God’s law?

And finally, with regards to conscience, many early cultures once independently reached the rather natural conclusion that sun was a god. How did they all “just know” this? Did God write this message on the hearts of the Aztecs, Incas, Egyptians, Greeks, Hindus, Persians, West Africans, Celtics and others? Did God guide their conscience to this conclusion?

How can we obey God’s “natural laws” when these laws can be so misleading?

There is ultimately no truly satisfying Christian answer to the question of how God might deal with those who have never heard the gospel.

But if we dare to assume that the logical conundrum only exists because Christianity is a flawed human creation, then the problem goes away. But I suspect Christians will have a problem with that solution.

Like Loading...
This entry was posted in God's Behavior, New Testament and tagged Atheism, Christianity, Religion, salvation. Bookmark the permalink.

212 Responses to 28. If someone never hears the gospel, can they still go to heaven?