23. Why doesn’t the Bible mention Neanderthals?

Neanderthals are interesting because of their distinct features and fairly recent extinction. But if they lived with our ancestors, why doesn’t the Bible mention them?

Neanderthal History According to Science 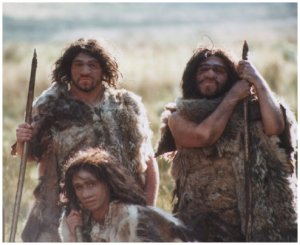 The relatively new science of Paleogenomics is uncovering an interesting story about the relationship between modern man and our Neanderthal relatives.

The story starts with Neanderthal showing up in Europe about 400,000 years ago, long before modern man. About 350,000 years later, our great, great, great, great grandparents finally found the exit to Africa and were reunited with their long lost Neanderthal cousins. We know this because you and I (reportedly) have about 1-4% of Neanderthal DNA pumping through our veins, whereas subsaharan African tribes do not (guess they weren’t invited to the party).

Fast forward 12,000 years and Neanderthals are extinct. No one knows exactly why, but modern man was there to watch, and perhaps even lent a helping hand. 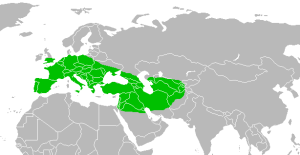 According to genetics and the fossil record, modern humans emerged from Africa and met up with Neanderthals. They engaged in copious amounts of coitus, and then modern humans watched the Neanderthals die off (well… they probably didn’t die off because we had sex with them, but who knows, maybe we were just that good).

So the question is, why doesn’t the Bible mention this encounter and the subsequent extinction?

Neanderthal History According to the Bible

AnswersInGenesis.org, as their name implies, finds the answers in Genesis:

“Neandertal fossils are all post-Flood, so these bones are believed to represent just one more group of people which split off from other groups following the Babel dispersion.” 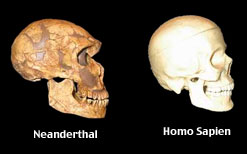 So, according to Answers in Genesis, the Neanderthal are nothing more than another race, like Africans, or Chinese, or Democrats. Problem solved? Well… maybe, but before I mail off my check to the Creation Museum to help rebuild the ark, I’d like to take a closer look at some of those differences.

Some of the differences are obvious by just comparing skeletal structure. Recent genome research tells us these differences add up to a .5% difference in DNA. These differences were significant enough to drive Neanderthals to extinction, while apparently leaving us unharmed. 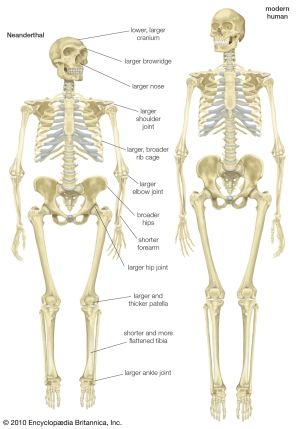 These differences suggest that Neanderthal and Homo Sapiens must’ve spent a fair amount of time apart. (If they were always together, these millions of genetic differences would’ve never emerged.)

This isn’t much of a problem for science, which says Neanderthals changed during their 300,000 year European vacation, but it can be a problem for the much more conservative Biblical timeline of history (which lasts only about 6,000 years).

How did Neanderthal evolve so quickly?

These Neanderthal would’ve had to accumulate a .5% difference in DNA very rapidly. If Neanderthal split off from Babel around 2242BC, they would’ve had very little time (less than 1000 years) to evolve their unique genetic traits before passing them along to modern humans and going belly up.

Compare this to the evolution of the Aborigines in Australia or the first Americans. These groups spent much more time in isolation, yet have never amassed the .5% difference in DNA that the Neanderthals somehow managed.

What’s more, both Aborigines and early Americans reportedly have traces of Neanderthal DNA! So not only did the Neanderthals have to develop their unique DNA quickly, but they had to do it in time to share it with other races before they set out on their long journeys.

So, barring any undocumented miracles or high doses of radiation, I don’t see how Neanderthal would’ve managed to develop such unique DNA in time to share it with the rest of the world, at least within the conservative Biblical timeline.

The only other species of humans hinted at in the Bible are the infamous Nephilim (Gen. 6:4, Num 13:32-33), a race of giants “as tall as cedar trees” (Amos 2:9) who were the offspring of the ever-mysterious “sons of God.” The Bible says that, to the Nephilim, the early Jews looked as small as grasshoppers. 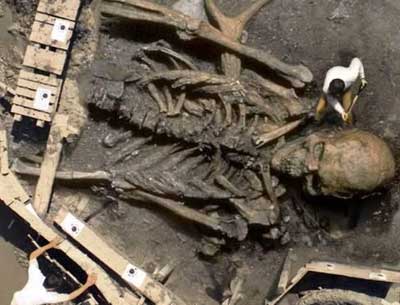 One of many giant skeleton hoax photos.  You won’t see this guy in a museum any time soon.

Some people try to link the Nephilim to the Neanderthals, but the Neanderthals were by no means giants, averaging just over 5′ tall. So unless the early Jews were elves, this doesn’t compute.

And for the record, we’ve found over 400 individual Neanderthal fossils (some even in Israel) and zero Nephilim giants.

The fact that the Neanderthal were able to develop unique DNA also adds some evidence to the theory of evolution.

I don’t think it’s unreasonable to suggest that if they continued in isolation, these differences would’ve continued to mount. We can extrapolate that, if left alone, these changes would’ve continued to accumulate. Just a 5% difference in DNA would make these once-humans as genetically different from us as the chimpanzee. Presumably this would make us no longer able to interbreed, making them a different species of man.

If a modern human can become 5% different, is it all that absurd to believe that chimps and humans could’ve diverged from a common ancestor, and evolved a 5% difference between them?

The Problem with Old DNA

Modern science has only recently decoded the entire Neanderthal genome from bones “between 38,000 and 70,000 years” old. Scientists also think it might be possible to sequence genes from Homo erectus, dating back to about 100,000 years ago. But like a Twinkie, DNA also seems to go bad after about 100,000 years.

But this raises yet another question: if all other hominids (Homo habilis, Homo heidelbergensis, Homo ergaster, etc.) were also nothing more than different races from Babel, why can’t we reconstruct their DNA? If they are no older than Neanderthal, this should not be a problem. (And that also goes for dinosaurs and other extinct creatures.)

If the Bible is true, it would be nice if it mentioned:

And while this would certainly be nice (and impressive), I can’t fault the Bible for not mentioning it, it’s just a curious (and somewhat suspicious) omission. But the fact that we’re digging up Neanderthals, and not Nephilim giants, certainly doesn’t bode well for the Bible’s version of early human history.

I think the honest-to-Darwin truth is that the Bible was written sometime after 2000BC, at a time when Neanderthals were long gone. They Bible’s authors didn’t write about the Neanderthals because they didn’t know they ever existed (and apparently God didn’t feel the need to mention it).

109 Responses to 23. Why doesn’t the Bible mention Neanderthals?